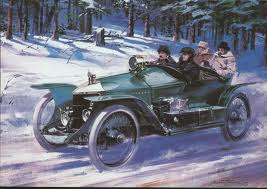 In 1910, the Vauxhall Motor Company entered three cars in the Prince Heinrich Tour.  This was an event named after Prince Albert Wilhelm Heinrich of Prussia, and was an automobile contest held from 1908 to 1911 and a precursor to the German Grand Prix.   Prince Heinrich was the brother of Emperor Wilhelm II.  He had staged a Kaiserpreis for automobiles in 1907 (and also for other sports too) and was an automobile enthusiast and inventor.

Only production touring cars with four seats and three passengers were admitted in the Trial and no specially made race cars were permitted. The trophy for the winner was a model car made of 13,5 kg silver.

The Vauxhall cars on the event were built to a new design by the brilliant engineer, Laurence Pomeroy, and were called the C10 model. Whilst the vehicles did not win the trial, they performed so well against other entrants with bigger engined cars that they attracted widespread interest and the company continued to develop them for their sporting and record breaking endeavours.

Soon known as the ‘Prince Henry’ Vauxhalls, the model became widely acknowledged as the first British Sports car and the first car in the world to exceed 100 mph with a 21hp engine.

The three litre engined Prince Henry Vauxhalls of 1910 -1 912 went on to win many speed events at such places as Brooklands, Shelsley Walsh and Aston Clinton.   In 1912 Vauxhall entered two Prince Henry cars in the 1912 Swedish Winter Trial.  Of the total of sixty cars made, only four survive today, two running in the UK and two in Australia, but only one is one the road.

The acknowledged expert on Edwardian Vauxhalls, Alisdaire Lockhart decided to recreate one of these Prince Henry Vauxhalls.  The 14 year project started with the gathering of a collection of parts and the modification of the chassis to meet the configuration of the 1912 cars.  Engine parts were sourced from South Australia and after a considerable amount of work and technical expertise, a motive unit to 1912 specification was produced.  The body – with an ash frame – was constructed from drawings and photographs of the 1912 car, and in 2010 the car was completed just in time for the Prince Henry celebrations at Shelsley Walsh,

Alisdaire is now taking the car to Sweden to commemorate the centenary of the Great Winter Reliability Trial of 1912.  Two cars were entered in the event 100 years ago.  One – a 20hp Prince Henry – for Percy Kidner, the Managing Director of Vauxhall and the other  – a 20hp A type – for Hjalmar Kjellgren, the company’s agent in Sweden.

The trial of 1000km (600 miles) consisted of a reliability run from Stockholm to Gothenburg along the north side of Lake Wettern, returning to the capital by a route taking in the south side of the lake.  The 41 entrants started the event at one minute intervals, with a maximum speed of 30kpm in daylight and 20 kpm at night, with a compulsory 12 hour stop at Gothenburg.  From the outset, Kjellgren stuck to the rules incurring no penalty points whilst Kidner went as fast as possible throughout the event, meaning that he led the event back to Stockholm.  When results were announced Kjellgren’s car was placed second, but Kidner lost many points for travelling too fast between checkpoints and was placed 11th overall.  However, it was deemed that the Vauxhalls were the fastest cars on the event and came home in glory but without the major spoils of battle!

The 2012 centenary celebration of the Trial will feature Alisdaire Lockhart’s recreated Prince Henry Vauxhall following the route of the original event where possible and visiting landmarks on the run with a reception at the headquarters of the KAK (the orgainsers of the 1912 event).  Alasdaire will be accompanied by Kay Mordza, of the Svenska Vauxhall Register and Andrew Duerden, Vauxhall’s Archivist.  The car will also be on show at the Tjoloholm Classic Vehicle Rally on the weekend prior to the run.